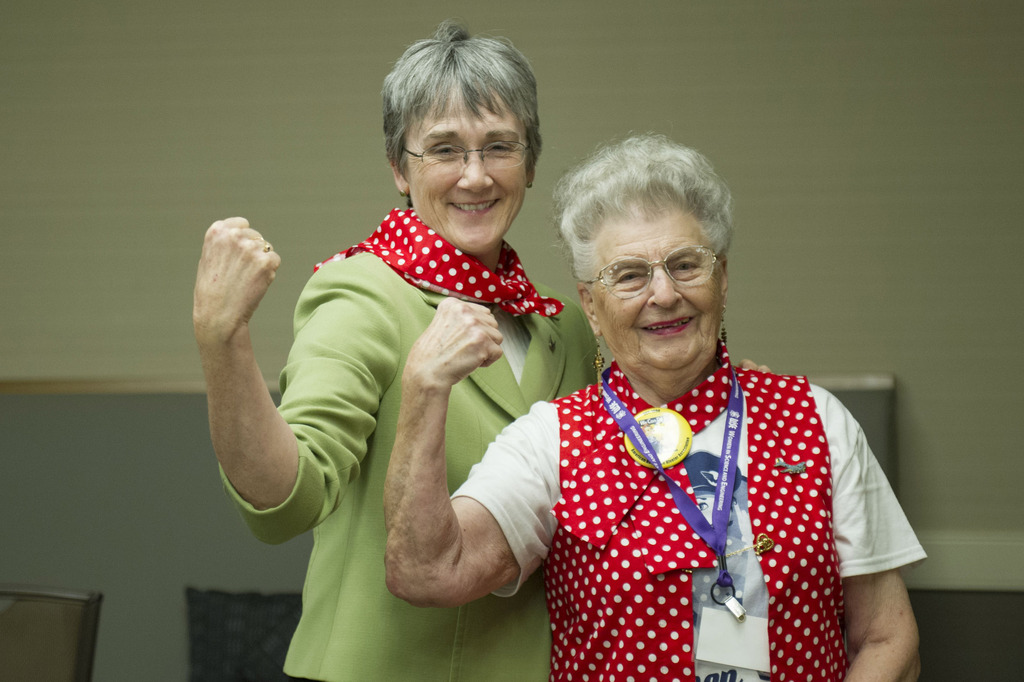 PATRICK AIR FORCE BASE, Fla. -- For the fourth time in as many years, the Air Force Technical Applications Center hosted its annual Women in Science and Engineering (WiSE) Symposium Feb. 7-8, with Secretary of the Air Force Heather Wilson as the featured keynote speaker.

The symposium was established in 2013 to bring attention to and highlight the value that gender diversity brings to the science, technology, engineering and mathematics workforce. It also focuses on encouraging mentorship and networking opportunities for those interested in pursuing and excelling in STEM careers.

“The idea of the conference is to bring the brightest women who have achieved enormous success together with young minds interested in STEM,” said Col. Steven M. Gorski, AFTAC commander. “We invite the best speakers from various industries – academia, defense, corporate, and commercial – to share best practices in promoting STEM, resources available to both employers and potential candidates, and most important to inspire the leaders of tomorrow.”

During her presentation, Wilson touched on many of those concepts Gorski listed, with a heavy emphasis on the importance of adding proverbial tools to your tool box.

“We all must find what we’re passionate about,” Wilson explained, “and once you find your passion, whatever you’re doing really doesn’t feel like work. Continue to develop your skills, surround yourself with smart, enthusiastic people, and seek out opportunities to find better ways to do business. Keep adding those tools to your tool box, and one day you’ll put them to good use. You may not realize it at the time, but ultimately you’ll be glad you did.”

Harris, the current Inspector General of the Air Force, discussed the need for senior leaders to “develop our STEM successors” and gave tips on how to recruit the next generation of STEM professionals.

“Discipline, teamwork and leadership are absolutely critical characteristics for those just entering today’s workforce,” she said. “As leaders, we must pay attention and embrace opportunities that present themselves to us, teach the up-and-comers the need to persevere, and ensure we as senior decision makers widen our aperture to ensure we’re fully developing future STEM candidates. Our nation needs sharp, smart scientists, and events like this give those in the local community the chance to be exposed to great minds and great mentors.”

Attendees also had the opportunity to meet Mae Krier, one of the original “Rosie the Riveters,” who conducted a break-out session to discuss her experiences constructing B-17s and B-29s during World War II.

“It was so very nice to be asked to be a part of this wonderful event,” Krier said. “When someone asks me to give advice on how to make a difference in the world, I always say, ‘You’ve been given a brain, now you’ve got to use it!’ That’s how we made it through the Great Depression. The things you value most in your life are the things you have to work hard for. We were poor back then, with not much opportunities, but we were happy, and we shared what we had. I think that’s an important lesson.”

Wolfenbarger praised Krier and other women in the service whose footsteps the general has followed.

“We owe a huge debt of gratitude to women like Mae and those who have served our nation, going all the way back to America’s Revolutionary War,” she said. “Some have called me a pioneer of sorts, and it’s humbling, but I never really wanted to be known as the ‘first woman’ at something; I wanted to be recognized for the mission I was accomplishing the best way I knew how. I’ve seen great change and progress over the span of my military career, and I’m proud of the gender diversity our service has seen throughout the course of my 35+ years as an Air Force Airman. But we’re not done yet!”

AFTAC’s WiSE program coordinator Maj. Mandi Fuller, was proud of the work her team accomplished to make the event a continued success, and was touched that the program is achieving its goal.

“On day two of the conference, I had a young girl, probably about 12 years old or so, approach me to say thanks for putting on the conference. She said she’s always had a passion for flying, and now she is doubly inspired to become a pilot. I thanked her right back, winked, and told her she better be looking at becoming an Air Force pilot!”

The program has grown from 14 speakers and panelists in 2014 to 25 in 2018. For more information about this year’s event, including speaker biographies, break out session topics, photos of past presenters, and the symposium agenda, visit www.wiseusaf.com.