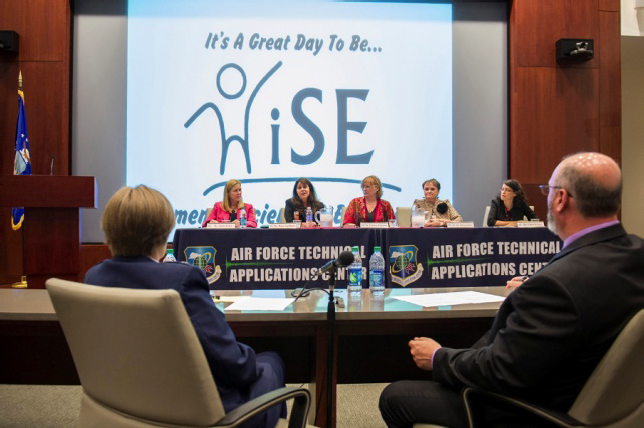 Nearly 230 people attended the event that was open to the general public, despite being held on a military installation. Attendees from all walks of life – education, industry, federal service, defense department, and aerospace – registered to be a part of the inaugural event at AFTAC.

The conference began with the emcee reading a letter from Dr. Jill Biden, second lady of the United States. In part, it read, “At the White House, we strongly support a scientific community that reflects the best America has to offer, regardless of gender. Research has proven that diverse workgroups, whether by gender or ethnicity, lead to the production of higher quality work, and successful leaders know that the secret ingredient for building a thriving business, more effective government and well-prepared military is identifying and harnessing the best talents of all people from all corners of our country. Welcome to AFTAC and best wishes for a successful symposium!”

Symposium registrants were treated to a keynote presentation by Dr. Eileen K. Preisser, senior Air Force representative to the National Geospatial-Intelligence Agency, whose presentation was entitled, “The Science Behind the Pursuit of Happiness.” She focused on how happiness affects productivity; how men and women differ when it comes to what makes them happy; and tools, resources and proven strategies to improve one’s overall happiness.

More than a dozen presenters headed up panel discussions that ranged in scope from recruiting and retention to preparing the next generation of WISE candidates.

The panel members were asked several questions about their experiences that affected them throughout their personal lives, but the question the audience seemed most intrigued by was when they were asked who had been the most influential in their career.

“There are three significant people who played a crucial role in where I am today,” said Lockhart. “The first was my mother. She helped vector me at a very young age. The second was my ROTC instructor, Lt. Col. Ron Kraus, who encouraged me to continue to pursue my math degree because he felt it would be very beneficial degree to have as a weather officer. And the third, to many people’s surprise, was a young noncommissioned officer named Tech. Sgt. Steve Rosemier. He took the time to help me understand how critical weather forecasting is to the warfighter and the mission overall. I’m indebted to all these people for making such a difference in my life.”

The concept for hosting a symposium of this scope grew from the AFTAC commander’s desire to incorporate a sense of diversity in his center that for years has been largely dominated by white males.

“Several months ago I held focus group sessions within AFTAC asking for candid feedback from my employees,” said Col. Chris Worley, AFTAC commander. “The single recurring theme I heard was the need for more diversity in the center, especially from a STEM perspective. So one of the goals I set for this conference was to find role models, both male and female, from a cross-section of fields, cultures, backgrounds and organizations, and listen to their success stories and professional lessons learned.”

After receiving that input, Worley quickly formed a committee to coordinate a conference that would link AFTAC personnel – not just women – with professionals in various STEM career fields. He tasked the committee develop a program to discuss modern-day empowerment strategies, while also looking to the future to see what challenges lie ahead and how the scientific community can manage and nurture STEM career paths for women.

“I believe we achieved that with this conference,” he said.

Dr. Glenn Sjoden, AFTAC’s chief scientist, provided closing remarks and wrapped up the symposium by thanking those who presented as well as attended, while also giving some sage advice to the audience.

“Remember that the buck stop with you – the leader,” said Sjoden. “When you understand your mission, you become a trusted member of the team and people will come to you to help solve the tough problems within the organization. So to accomplish that, hire people smarter than yourself. Follow your dream and get a formal education to master your area of expertise. But most important, be the kind of leader you would want to work for.”

“Our center was transformed into a bustling hub of scientists and engineers talking about work-life balance, and the role of networking and mentoring for a successful career – important topics that are too easily sidelined because of day-to-day activities,” said McNabb. “As challenging as it was to pull it all together to make sure every detail was covered, it was even more challenging for me to decide which break-out session to attend because they all piqued my interest! How do you choose between presentations on effective mentoring programs or growing and developing the next STEM generation? You just can’t!”

She added, “We hope everyone who attended walked away with a greater understanding of the significance of diversity in STEM, and how they play a central role to inspire and mentor others in STEM. We hope to be able to do another event like this again next year.”