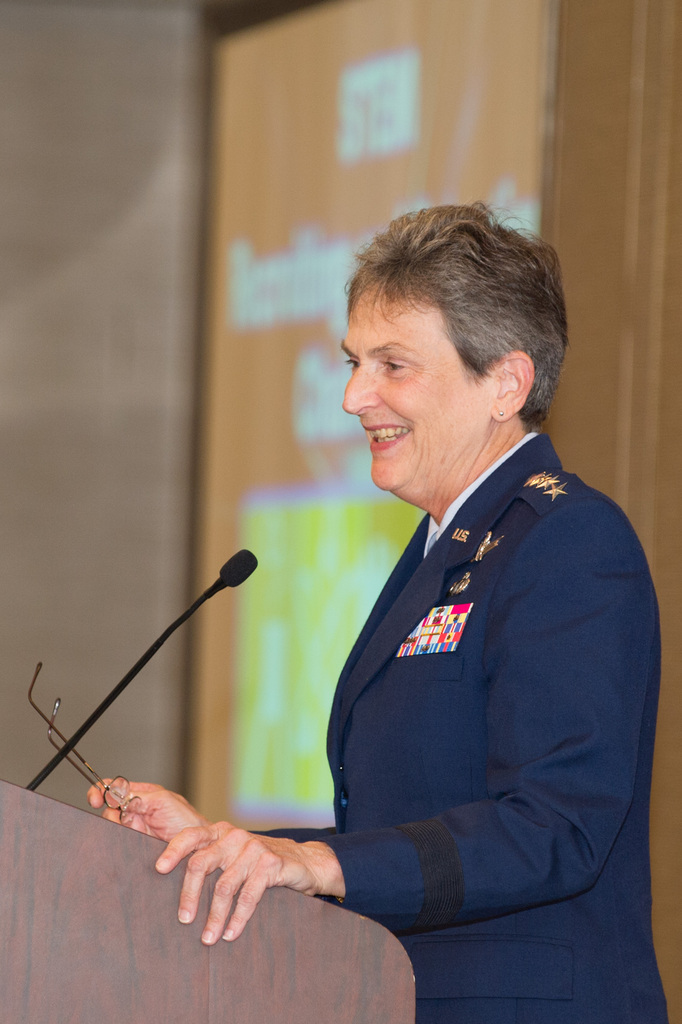 Gen. Ellen M. Pawlikowski, commander of Air Force Materiel Command, opened the 3-day symposium with a speech that reflected on her time as an engineer, dating back to her high school days in 1972 and leading up to her first assignment as the chief of mass spectrometry for AFTAC in 1984.

“When I was in high school, my dad made me take a drafting class and encouraged me to pursue a degree in engineering,” said Pawlikowski. “I’ll be honest with you – if you’ve never had to take a drafting course, you’re lucky. Of all the classes I’ve ever taken, drafting is not on my list of favorites!”

After high school, Pawlikowski earned her bachelor’s degree in chemical engineering in 1978 from the New Jersey Institute of Technology, a school very close to where she grew up. While she was on the path to both academic and professional success, she discussed the uphill climb she had in a field dominated by men.

“As many of my school girlfriends were taking music and chorus and home economics classes, I was in a class with all men. I felt very alone and isolated, and oftentimes not welcome. My girlfriends and I would meet up at lunchtime in the cafeteria and I wouldn’t be able to share in their conversations. It was tough for me. It wasn’t until I got to college and joined ROTC (Reserve Officer Training Corps) that I truly felt part of a team, part of something big, and part of something that made me feel like I really belonged.”

AFTAC leadership extended an invitation to the AFMC commander to serve as the WiSE keynote speaker not only because of her background and expertise in engineering, but also because of her connection to the nuclear treaty monitoring center.

“I was thrilled when I learned I received an assignment to AFTAC’s McClellan Central Lab in California,” the general said. “Here I was, a very young lieutenant, given the chance to put my T-square and blueprints expertise to work! And what made it even more gratifying was the fact that I was part of an exciting, vitally important mission.”

AFTAC’s WiSE Symposium is in its third year and has grown from 14 speakers and panelists its first year to 34 in its third. The event encourages diversity in the fields of science, technology, engineering and math (STEM) by providing inspirational presenters and engaging discussions for both women and men in and outside the federal government.

Much to the delight of symposium attendees, an unexpected speaker surprised the audience on day three of the event. Secretary of the Air Force Deborah Lee James, who was in town visiting the 45th Space Wing to observe the launch of the Atlas V, treated the guests to some words of wisdom and encouragement.

“I’d like to share a few lessons I’ve learned on how to be successful,” James said to the standing-room-only crowd. “The first is to be ethical. While as a leader I am comfortable making a decision based on an 80 percent solution, I will never compromise my ethics. That has to be 100 percent all the time. The second is the importance of a mentor. I encourage you to seek out a good mentor; invite someone you respect to have a cup of coffee. You’ll find most people love talking about the subject they care most – themselves! The Air Force has a great program called ‘MyVector’ where you can be paired up with leaders who share your passion and interests. But do you best to seek diversity in your network.”

This year’s theme, “Breaking the Norm,” was created to help guide the symposium’s numerous discussions and breakout sessions in the direction of how professionals can work to dispel myths and outdated mores that women are not ‘normally’ found in STEM fields.

Dr. Alison Tamasi, a radiochemistry team lead in AFTAC’s Ciambrone Radiochemistry Lab, volunteered as a moderator, helped craft questions for a panel, and attended several presentations and breakout sessions. “I truly enjoyed the whole symposium,” she said. “The networking opportunities were world-class, but it was also amazing to meet women I looked up to and hear that they faced some of the same difficulties I have. Supporting women in STEM is something that everyone needs to have a vested interest in, not just women; otherwise the culture will never change.”

According to AFTAC’s WiSE program coordinator, the symposium planning team that put it together had multi-faceted objectives the group wanted to achieve.

“We need to inspire diversity of thought through STEM outreach,” said Maj. Mandi Fuller, a space program manager with AFTAC and program coordinator for the 3-day event. “As an organization, we also need to gain an international perspective and leverage global strengths in STEM fields and replicate them. By doing so, it will give us the ability to establish mentoring and networking opportunities to future support career growth in these highly technical and demanding career fields.”

Fuller added, “As women, we need to share success stories and lessons learned from women and men, particularly those in education and industry, which in turn will help shape the future of the STEM career fields within the Department of Defense. I’m extremely pleased with what we have been able to achieve with this year’s event!”

More than 250 people attended the 2016 WiSE Symposium, and AFTAC plans to continue to host the event for years to come.