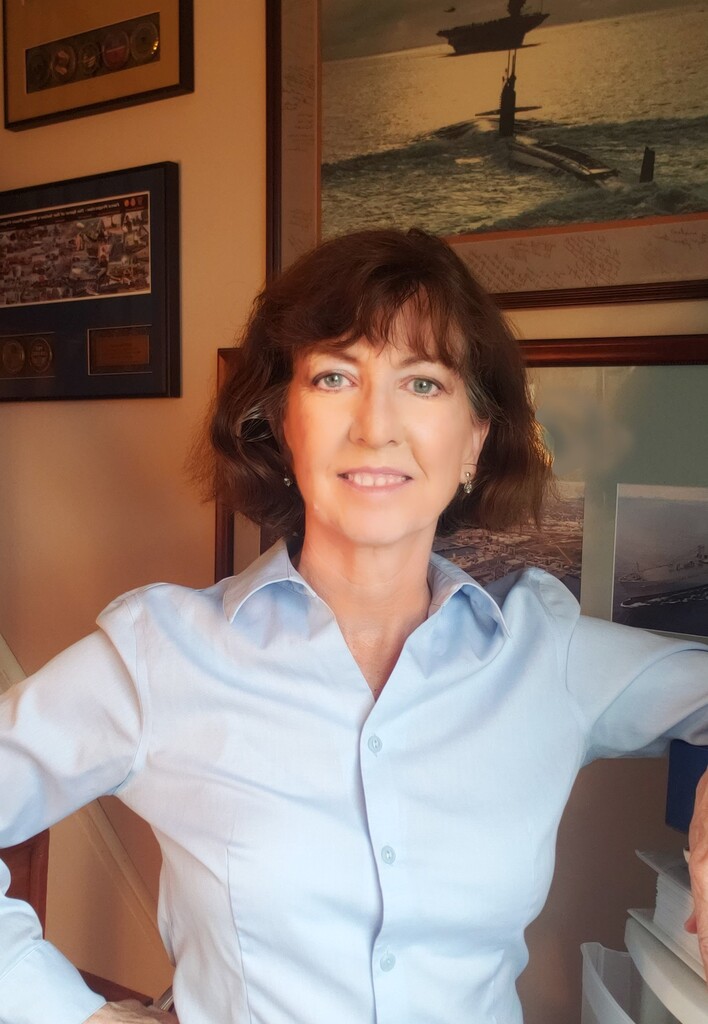 CAPT Pat Sudol was one of the first women to enter the Naval Academy in 1976, graduating in 1980 with a degree in Oceanography.  As women were not permitted to serve on combatant ships at that time, she was assigned to USS HOLLAND (AS 32), a Submarine Repair Ship, where she served as their first female Repair Department Division Officer, the Engineering Department Electrical Officer, and as the Operations Department Head during the ship’s circumnavigation of the globe.  She qualified as a Surface Warfare Officer, and was selected to go to Department Head School to prepare for potential future duty as a ship’s Engineering Officer.  She certified DAWIA Level III in Program Management in 1994 based on experience alone, an unusual achievement.  After earning her Master’s Degree at the Naval Postgraduate School in Engineering Acoustics (a multidisciplinary degree across the electrical engineering, physics and computers disciplines), she transitioned from the Surface Warfare community to the Engineering Duty Officer community and became a qualified Engineering Duty Officer in 1986.  Her post-graduate thesis work won the 1987 Naval Undersea Systems Center (NUSC) Award for Excellence in Underwater Technology.

As the Repair Officer at the Ships Intermediate Maintenance Activity, she led roughly 1800 personnel in 78 production/production support shops in maintaining the ships and submarines of the Pacific Fleet.  She stood up a new Nuclear Submarine Maintenance Division, which achieved an unprecedented Submarine Safety (SUBSAFE) certification on the first inspection.

After retiring from the military with over 27 years of service, and in recognition of her extraordinary breadth of experience, CAPT Sudol was asked to develop and teach a ship acquisition focused curriculum.   Her curriculum was so well received that the Assistant Secretary of the Navy for Research Development and Acquisition stated in Congressional testimony the Navy's intent to transition her training to the Defense Acquisition University.  With her help, the course was transitioned accordingly!

CAPT Sudol continued to work as a consultant and acquisition analyst providing support when requested to the US Coast Guard, Missile Defense Agency (Aegis Ballistic Missile Defense), and the Navy   She concurrently worked as an Intermittent Professor of Program Management for the Defense Acquisition University.

As of 2020, CAPT Sudol is fully retired and living in the wilds of Pennsylvania!