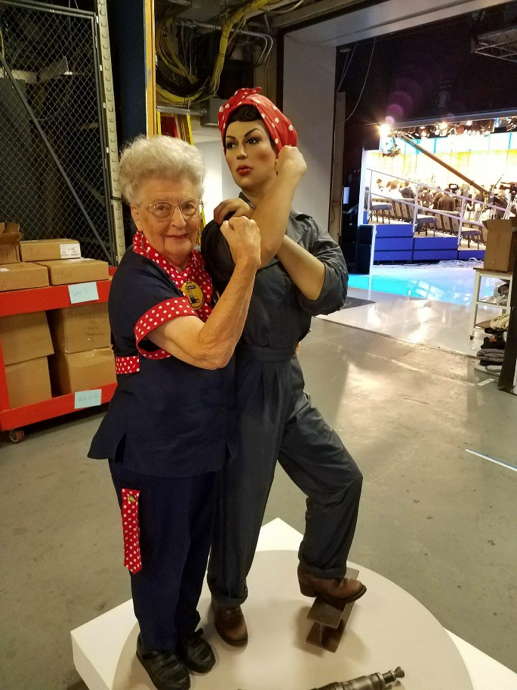 Mae Krier was born in North Dakota in the 1920's. Calvin Coolidge was President and it was during the Great Depression and the infamous Dust Bowl. Times were really difficult for everyone, not just the ones in the Middle West. Our family was poor, but a happy family with very loving and generous parents. When someone would be down and out, they would take them in or help them through the bad times. That was the way of life during those years. Things didn't start to get better until Roosevelt brought in programs like the WPA and the CCC's. They were great programs to help bring us out of the depression.

We were a small community between two larger towns and the trains used to stop in our town to refuel. The Bums or Hobo's as they called them, used to get off the train and come knock on the door to see if they could do something to earn a sandwich, which my Mother always gave them. As a child I can remember them sitting on the step, usually eating an egg sandwich, but they would be very appreciative and then they would move on. These men weren't harmful, they were caught up in the depression like everyone else. All they wanted was a decent job so that they could survive.

By the 1930's, due to Pres. Roosevelt's programs, things started to look up. Of course by then we were starting to worry about Hitler and what he was doing in Europe. At the same time we were selling scrape metal to Japan, never dreaming that they would be using it against us.

I remember December 7th, 1941 so well. It was a Sunday and my sister and I were at a movie. When we came home our Folks were sitting by the radio very upset. When we asked what had happened, they told us that Japan had bombed Pearl Harbor. I stood there for while thinking, “Do I really know where Pearl Harbor is?” Days later, Hitler declared war on us. So now we are fighting wars across two oceans. We, as a nation, weren't prepared for war.

Within weeks, all of our young men signed up and left for war. That was a very sad time for our small community. I remember the day my brother enlisted and we put him on the train. When we came home, I ran through a room where I found my Father crying. My Father was a very happy man and I had never seen him cry before. That is a memory that I will never forget.

My uncle who was a rural mail carrier also enlisted. His job needed to be filled and they gave it to my Mother. I think it was a Federal job. All I know is that it had to be done. If you are familiar with those terrible winters in the Middle West, you will realize what a challenge that was for a women. The farmers used to time her and if she didn't show up when they expected, they would come looking for her, possible on horseback or tractor. They didn't want her to be stuck in the snow. I think she was possibly the first women to fill a man’s job as he went off to war. I call her my first Rosie.

Now that the boys had left, we girls thought we would get into the act also. My Sister, girlfriend and myself decided to go to Seattle and work at Boeing for the summer. We thought that would be a lark. The way it turned out, we loved it and stayed there during the war. I build B-17's and B-29's. I loved working on these planes and as time went on, we realized what we were doing for our country and how proud we were to be doing it. Many important people have told me that if it hadn't of been for the women, we may have lost the war.

In 1944, on the dance floor at the Service Men's Center in Seattle, I met this cute sailor who could really dance. We became good friends and in 1945 he was transferred. By then we knew we loved each other, so we married. Had he lived a few months longer, we would have been married 70 years. I've had a really good life.

Now I'm working to get Rosie the Riveter a National Day. So far I have succeeded in getting our First National day on March 21st this year. It is only for one year, so now I have more work to do to make our country realize that we deserve a National Day. When men came home from war, they were greeted with a parade and flying flags. Rosie’s came home with a "pink slip". That was so unfair for what we did for our country. I've often said had it not been for the women, we might be speaking German or Japanese today.

We want to go down in history, like Veteran's Day. We are asking for a "NATIONAL DAY OF RECOGNITION FOR ROSIE THE RIVETER, MARCH 21ST, WOMEN’S HISTORY MONTH". I don't think this is a lot to ask for since we did so much for our country.